Small cruise ships share many of the same perks as the large cruise ships. For instance the earning potential on a smaller ship is no different than on a larger one. Benefits are almost always offered and room and board along with some other living expenses are often provided. Thus, from a salary position, an employee on a smaller cruise ship is afforded the same savings potential as they would if they were working on a large ocean liner. In fact, most of the differences between working on a small cruise ship as opposed to a larger one are social or geographical.

Because many of the smaller ships are riverboats, requiring a more petite 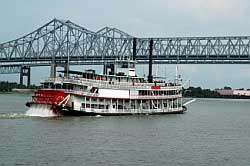 body to navigate narrow passageways and shallower waters, the guest list and the number of staff members must be fewer. On some riverboats the number of guests can be as few as twelve, meaning the difference in the social nature of the boat is incredible. These smaller staffs often experience a more intimate and close-nit relationship with the others onboard. Along with this, staff members usually have many jobs as opposed to one specialized form of work and the days are often much more variable with a larger range of tasks. Because there is so much variety in work, staff members in subordinate positions are often asked to take on more responsibility and work on a smaller ship often means moving up to higher more coveted positions sooner than on a large ocean liner. Many employees who desire a position which might take years to attain on a large cruise ship gain the experience and the know-how onboard a smaller ship making them a more viable candidate for better paying and higher title jobs onboard a large ship.

Geographically, the differences in working onboard smaller ships are incredible. Small ships such as riverboats can navigate waters the larger boats cannot, making it possible to see places you could never see onboard an ocean liner. Traveling through rivers offers some of the most amazing travel opportunities available, mixing land and sea travel to an amazing extent. In terms of popularity, cruises of this sort are booming and river ships are seeing more and more passengers each year. Some of the places a small ship might visit that a larger one could not, include: the Amazon, the Nile and the Rhine-Main-Danube waterway, the longest in the world, connecting fourteen countries across Europe. River vessels usually port in larger cities and employees are typically granted the freedom to leave the ship at night for exploring and to enjoy the world’s many cities.

Aside from river specific vessels, other boats that these same small-ship perks are: yachts, barges and sailboats. Eco-cruising is considered transportation on a boat where the environment is minimally effected by the ship and members onboard. While most cruise ships take pains to ensure their boat doesn’t negatively effect the water and world around them, boats like sail boats have little to no impact on the environment. Cruising of this sort has engaged a very particular crowd often with employees who want to learn sailing and the mechanics of a ship as well as passengers who are less interested in traditional vacation style amenities and who are typically more adventurous. Eco-touring usually has focuses other than just the ship and normally, other environmental aspects act as an integral part of the passenger and ship staff experience. It is easy to see then, how different small cruise ships are from their larger counterparts.

The Role of Cruise Concessionaires =>